Lecce: The Florence of The South 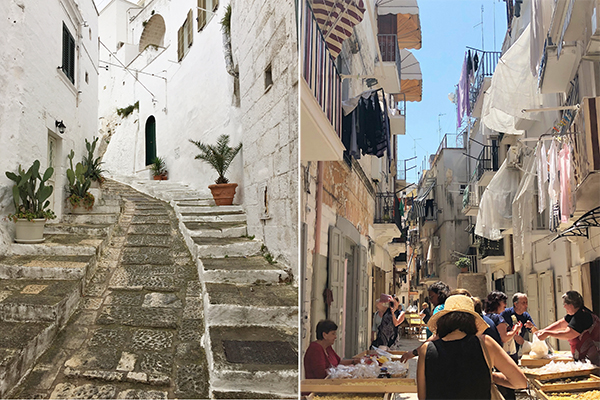 We spy with our little eye a new love affair brewing in Southern Italy: you + Lecce.

Usually overshadowed by her shinier counterparts in Southern Italy –– the Amalfi Coast and Matera, for example –– Lecce is the definition of under-the-radar, hiding at the bottom of Italy’s boot heel. She’s less glam but more gorgeous than most people realize.

The easiest way to describe Lecce: she’s basically the Florence of the South.

Baroque extravagance at its best. Sweet spiraled columns towering over you. Cute cherubs in creamy limestone squeezed into every corner. Piazzas and palazzi popping out every two seconds. Gorgeous gargoyles grinning and grimacing.

After changing hands between the Romans, Byzantines, Normans, and Sicilians over the centuries, Lecce’s architecture has been getting makeovers (especially in Baroque-style) from fresh young architects for, like, ever.

The result = wowza buildings oozing creativity that lights up your freshly-tanned face.

Read on to find out why we adore Lecce –– and why you will, too.

What’s so special about Lecce?

Here’s what sets Lecce apart from so many Italian cities –– it’s not a place for “doing.” We won’t give you a list of “must-sees” in Lecce.

Lecce is a town for experiencing.

That’s exactly why we spend a third of our Southern Italy Tour right here. We’re all about making our way through a town with our senses vs. our guidebooks.

But back to Experiencing Lecce:

It’s a teeny-tiny town that was practically built for lazy strolls and unapologetic people-watching!

Here are five things that are totally unique to Lecce (they may or may not revolve almost entirely around food):

How do I get to Lecce?

What can I experience in Lecce?

Lecce is where you can:

Start your day by sipping on their coffee specialty: caffè in ghiaccio con latte di mandorla (espresso with ice and almond milk).

Dance the pizzica, a popular folk dance in this town and a totally normal thing to do any time of the day 😉

Try out every little café, bar, and restaurant and sit outside to watch everyone else strolling without any rush because that’s how they roll here.

Count cool churches over aperitivo or on your walk home, because they seem to be infinite.

Cruise through beautiful little boutiques on Via Palmieri and Via Vittorio Emanuele II and pick up one-of-a-kind pieces your friends will drool over.

Take day trips to the Puglian countryside and temporarily consider moving into their olive groves and vineyards, in a Primitivo-induced haze (Lecce’s wine specialty).

Lecce is truly a town for pure, guilt-free pleasure. We recommend leaving your watch at home because you don’t need to be on a schedule here.

That’s exactly what our Southern Italy Tour clients come looking for, and it’s what they get!

Speaking of which, in case you’re wondering…

What do we do in Lecce on our Southern Italy tour?

Step into the new leather sandals of Future You –– imagine three days in Lecce for a second (indulge us), with your new Italian and international besties.

Fresh off of six days exploring Positano and Matera, you roll up to Lecce ready to slow down like you mean it.

On Day 1 in Lecce, we show you the lay of the limestone land! You’ll check into our sweet hotel right in the center of town and set out on a mission to stroll leisurely with our amazing local guide. He knows all the best stores, so naturally, we’ll squeeze in some retail therapy (but it won’t be hard) and a beautiful Puglian lunch at the most adorable spot. Our tours aren’t rigid, though –– we adapt and mold them to our group and what they wanna experience.

After a relaxing evening winding down in the best company –– you hit up your gorgeous bed for much-needed rest for the day ahead.

Day 2 in Lecce is where we venture out to the countryside we mentioned we loved so much! We head out to nearby Ostuni, a crown of white buildings spread over three hills overlooking the Adriatic Sea. You’ll do three key things: eat at a local masseria on a gorgeous sprawl of olive trees and vineyards. Sip on exquisite wine you’ll want to tuck away in your suitcase. And gather new inspo for your future home in Italy after wandering through small villages peppered throughout the countryside.

Day 3 in Lecce is also Day 10 on our Southern Italy Tour –– your last sun-soaked day in the heel of Italy. Naturally, we gotta make it franfreakintastic! We eat together on our gorgeous rooftop breakfast terrace. You + your new besties make classic Puglian food together, listen to live music, try our hand at dancing the pizzica (don’t worry, what happens in Italy stays in Italy) and swap contact info and teary hugs after experiencing ten glorious days together.

So, wanna love up Lecce with us?

We launch our 2020 tours in just a few weeks, and we have a couple of Southern Italy dates scheduled.

There’s a glass of Primitivo just for you at our sidewalk table next year. Want in?

Leave a comment below and we’ll jump in to help!

You nailed it with these. I traveled and you hit every major sight that I would recommend to visitors! Great post!!!